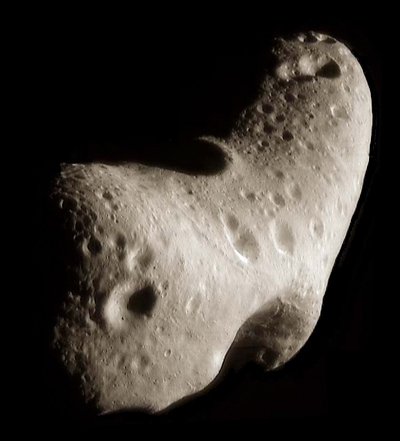 Asteroid Eros is the first asteroid discovered whose orbit is mostly within the orbit of Mars and which passes the orbit of Earth.

The approaches of the asteroid Eros

The shortest distance it has reached from the Earth was 23 million km in 1932 and astronomers took advantage of this approach to determine the value of the astronomical unit (ua) which is 140 million km, the average distance from the Earth to the Sun.

At the point closest to the sun (perihelion) Eros’ orbit is very close to Earth’s, but does not cross it.

Eros was discovered on the night of August 13, 1898, independently by three astronomers: Gustav Witt, who named him), F. Linke in Berlin and by Augusto Honorato Pedro Charlois from Nice.

The asteroid Eros has an elongated shape. It measures 33x13x13 km.

On February 12, 2001, the NEAR mission collided on the surface of Eros, surviving well enough to send an analysis of the composition of the asteroid’s surface from there.

The probe continued to transmit data from the asteroid’s surface until February 28, 2001.

The NEAR probe allowed scientists to discover that Eros is a rocky fragment, which formed during the first years of our Solar System.

Scientists who have studied it have found no sign that it has ever melted in its entire history of possibly 4.5 billion years.

Eros currently occupies sixth place on the list of Near Earth Objects (NEO), in which NASA and other space agencies classify asteroids and other space objects that could cause eventual impacts in order of probability of impact. damage to Earth.

An explosion of this magnitude could easily devastate a small country, cause massive earthquakes, tsunamis, or even volcanic eruptions.

For this reason, NEOs as large as this asteroid are constantly monitored by NASA’s Jet Propulsion Laboratory, and they do so using an automated system called Sentry. This system manages to measure a large amount of data that allows determining, for example, that 2009JF1 is an Apollo asteroid, that is, that its orbit around the Sun is larger than that of the Earth.