Biography of William Herschel, a German astronomer and musician, discoverer of the planet Uranus and numerous other celestial objects, brother of astronomer Caroline Herschel and father of also astronomer John Herschel.

In the cover you can see a portrait of William Herschel made by Lemuel Francis Abbottv in 1785. Credit: wikipedia

Childhood and education of William Herschel

William Herschel, was born in Hanover, Germany on November 15, 1738.

Influenced by his parents, Friedrich studied music and became a competent oboe player, joining his father and his brother Jacob in the band of the Guards Infantry Regiment.

In 1757 William Herschel participated in the Battle of Hastenbeck, between France and Hanover during the Seven Years’ War.

Herschel decided to go to England

The more than 5,000 deaths that he witnessed, made a deep impression on him, and led him to move away from his native country and settle with his brother Jacob in England.

After two years, Jacob decided to return to Hanover but William preferred to stay.

The young Herschel deepened his musical studies in England: he became first a teacher and then an organist in Halifax .

The following year, Herschel was appointed conductor in Bath.

Since he was single, he decided to ask his sister Caroline Herschel came to live with him in Bath.

In 1772, his sister Caroline Herschel came to live with him in Bath.

It was then that, thanks to Caroline’s influence, the episode that would change William’s life occurred.

On May 10, 1773, Herschel  bought a book (Ferguson’s “Astronomy”) and fell forever in love with the science of the heavens.

A man hungry for knowledge and gifted with great manual skills, Herschel began from the beginning to calculate, design and build his own telescopes.

Less than a year after purchasing Ferguson’s book, hungry for knowledge and gifted with great manual skills, Herschel was already calculating and polishing the most perfect and powerful mirrors in the world.

Because he quickly understood that the future depended on reflecting telescopes, he started designing and building his own telescopes.

He built a telescope that had a lens 40 cm in diameter and 12.20 meters in length, of his own manufacture (he was very skilled at this).

His first great discoveries were made with the help of his first telescope, which he used until the end of his life.

While building custom telescopes, very abundant in those years of the “Enlightenment”, he observed the skies helped by his sister Caroline who wrote down all the details that William saw.

As early as February 1774, they had already observed and analyzed in detail the Orion Nebula, discovered earlier in 1610.

On March 13, 1781, Herschel observed an unrecorded object that at first glance looked like a comet: studying it carefully he soon managed to determine that it was actually a new planet.

It glowed yellow and moved slowly. Observing it night after night, Herschel concluded that he had discovered the seventh planet in the Solar System.

Herschel tilted the mirror of his telescope slightly so that it did not block the incident rays. Hershell had discovered the seventh planet of the solar system. 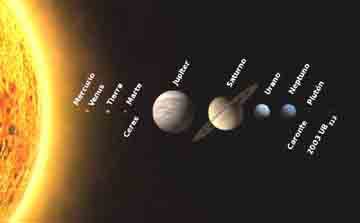 How the name of the seventh planet was chosen

Herschel asked other astronomers to confirm his diagnosis, and they all agreed with him: there was a new planet located twice the distance from Saturn.

Herschel baptized the planet with the curious name “Planet George“, in a strange tribute to King George III of England who had just lost all his possessions in North America due to American independence in 1776.

The “Planet Jorge” continued to be called that way until well into the 19th century, despite opposition from some astronomers who insisted that the mythological tradition should be continued.

According to them, as the names of the adjoining planets were Mars, Jupiter and Saturn, to continue with the genealogical sequence: grandson, father, grandfather.

The seventh planet was to be called Uranus.

The French astronomer Lalande proposed, for his part, to baptize the planet as “Herschel“. But this idea was not accepted and the name of Uranus prevailed.

However, until 1850 the British “Nautical Almanac” continued to cite the planet “Jorge” in its astronomical ephemeris.

Honors Received by the Herschel Brothers

King George III awarded Herschel for his discovery of Uranus by naming him a member of the Royal Society of Sciences and a Royal Astronomer of the Court.

Thanks to the salary that this appointment provided him, the astronomer was able to definitively abandon music as a way of life and dedicate himself exclusively to his science.

He made more and better observations, always assisted by his sister Caroline, who also began to receive an official salary, and began to build increasingly powerful and evolved instruments.

Other astronomical investigations of Herschel

In 1782, a friend he had met at the Royal Society, William Watson, presented him with a Messier Catalog, which stimulated Herschel’s interest in nebulae and clusters, collectively called “deep space objects”.

In August 1782, Herschel began investigating the objects described in Messier’s book, with his telescopes, more powerful than those that Charles Messier, author of the Catalog, ever possessed.

He realized that Messier’s book contained only a tiny fraction of the deep space objects in reality.

On October 23, 1783, with the help of Caroline and using his 157x refractor, he began a systematic search of all parts of the sky visible from his observatory.

Five days later he made his first discovery: NGC 7184, a small galaxy in the constellation Aquarius of magnitude 11.2.

In a year and a half he discovered 1,000 new deep space objects, the list of which he published in his own Catalog of 1786.

The Eskimo Nebula in the constellation Gemini, was discovered by Herschel in 1797.

In a span of less than two decades, Herschel discovered 2,514 new deep-space objects, including globular clusters, nebulae and galaxies.

Together with his sister Caroline, he set about not only counting stars, but also drawing a complete map of the Milky Way.

The result, although very primitive, is remarkably close to what is known today.

In 1783, Herschel verified that the Sun was not still as the theory of Copernicus and Galileo supposed. By comparing the positions of different relatively “fixed” stars.

He showed that the Sun drifts toward the star Lambda Herculis, dragging Earth and the rest of its planetary entourage.

In 1788, Herschel married the widow Mary Baldwin Pitt, who had been married to the powerful London merchant John Pitt.

In 1789, after working non-stop for two years, he completed the construction of a large telescope with an aperture of 1.20 meters, which for more than 50 years held the mark of being the largest telescope in the world.

He aimed it at the night sky for the first time on August 28 and within minutes he discovered the sixth moon of Saturn.

Three weeks later, on September 17, he detected the seventh moon of Saturn, which gives an idea of ​​the extraordinary optical quality of that huge instrument.

But the giant was difficult to operate, so Herschel continued to prefer his old, reliable 18-inch with which he had discovered thousands of galaxies in the past and with which he was able to discover “spiral nebulae”.

Hershel studied the proper motion of the stars and based on statistics of the star populations in each sector of the sky, he designed a fairly correct model of the Milky Way.

In 1792 she gave birth to the astronomer’s only son (who, in time, would follow in the footsteps of his father), John Herschel, in Slough, England.

In 1801 Herschel traveled to Paris, where he met the renowned French scientists Pierre Simon Laplace and the aging Messier.

Napoleon learned of the presence of these three reunited celebrities, he received them in his official office and spent long hours with them being interested in his discoveries.

In 1806 Napoleon imposed the Cross of the Legion of Honor on him.

When William died, his sister Caroline left England and returned to Hanover.

Her wife, Mary, remained in the family home until her own death ten years later.

In the courtyard of the Slough house a monument has been erected, located in the precise place where William mounted his enormous telescope.

An exact replica of this telescope is kept at the National Observatory of Spain, in El Retiro Park.

In the time of Carlos III, the Spanish government had bought a copy of Hershell’s telescope from him.

The transfer of this, was made by boat to the north of Spain; and, from there, on the back of a mule train.

During the French invasion in the early 19th century, French soldiers destroyed the Observatory and the telescope.

Fortunately, all the original plans had been preserved, which were used for its later reconstruction, which can be observed with admiration by the visitors of the current Observatory.