Ceres dwarf planet is the largest astronomical object in the asteroid belt, a region of the solar system that lies between the orbits of Mars and Jupiter.

In the cover image, two bright spots are seen in the Oxo (center) and Haulani (right) craters.

Ceres dwarf planet is between Mars and Jupiter

The substance that these stains mainly contain is sodium carbonate. Also visible is Ahura Mons, an isolated hill, in the lower right.

At the beginning of the 21st century, after the new definition of “planet“, Ceres was inscribed in the category of “dwarf planet“.

When was Ceres discovered?

In 1766, a German scientist named Johann Titius conjectured that the distance of the planets from the Sun followed a certain mathematical relationship.

It must be borne in mind that in those years Uranus, Neptune and Pluto had not yet been discovered.

Six years later, another German, Johann Bode refined this hypothesis, and spread it within the scientific community.

Since then, the theory of Titius and Bode was gaining prestige and the idea that there must be a planet located between Mars and Jupiter became general.

Titius-Bode assigned the value of 1 to Earth, whose distance from the Sun is 150 million km. This last figure is called the Astronomical Unit.

Everything fitted together well, except that no astronomer could find the fifth planet predicted in the Titius-Bode formula.

When William Herschel discovered Uranus in 1781, he greatly increased astronomers’ enthusiasm for finding the fifth planet.

In 1791, the Hungarian astronomer, Baron Franz Xaver von Zach, Director of the Seeberg Observatory, in Gotha, Germany, organized a group of 24 astronomers, dedicated to the objective of preparing a systematic search for the so-called “lost planet“.

Among five groups of astronomers they divided the zodiac in search of the fifth planet, and combined their efforts.

They did not find the lost planet, but they did discover large asteroids in the search area.

On January 1, 1801, the monk Giuseppe Piazzi, from Palermo, while reviewing a catalog of stars, found “something like a comet.”

Other astronomers calculated the orbit of the object, and assured that it responded to the location of the planet sought.

Ceres orbits between Mars and Jupiter, in the middle of the asteroid belt, with a period of 4.6 years. The orbit is moderately inclined and slightly eccentric.

Once the existence of this planet was confirmed, it was given the name of Ceres, the Roman goddess of agriculture, crops and fertility.

Half a century later, in the 1850s, Ceres was listed as an asteroid. Indeed, it is in the area currently known as the “asteroid belt.”

Origin and evolution of Ceres

Ceres is possibly a surviving protoplanet of the first stages of formation of the solar system, originating 4.57 billion years ago in the asteroid belt.

The geological evolution of Ceres, depended on the heat sources available during and after its formation.

Due to its small size, Ceres may have cooled off very soon, leading to the rapid cessation of all these geological remodeling processes.

The ice on the surface would have sublimated little by little, leaving behind different hydrated minerals such as clays and carbonates.

Today, Ceres appears to be a geologically inactive body with a surface sculpted only by impacts.

It is the thirty-third largest known object in the solar system. Its mass is estimated to be one third of the total mass of the asteroid belt.

Ceres is the only object in the asteroid belt that is nearly spherical in shape.

The surface is composed of a mixture of water ice and various hydrated minerals such as carbonates and clays.

In early 2014, using data from the Herschel space observatory, it was discovered that there were several sources of water vapor in mid-latitudes, concentrated in an area no more than 60 km in diameter.

The interior of Ceres could be differentiated into a rocky core and an ice sheet, with an ocean under the ice sheet.

The images had a resolution never before achieved, and showed a highly cratered surface and a thick layer of ice on a rocky core.

Spaceships that have approached Ceres

NASA launched the mission called Dawn in September 2007 to visit Ceres and the asteroid Vesta.

The Dawn mission entered Vesta’s orbit in July 2011, observing it for just over a year.

In September 2012, Dawn left Vesta and after a three-year journey, in March 2015, she reached Ceres.

In 2015, the Ceres Polar Lander project, linked to NASA, was announced.

For its part, the Chinese Space Agency has among its projects the launch of a probe to Ceres, which would return with samples, but the mission is scheduled for the 2020s. 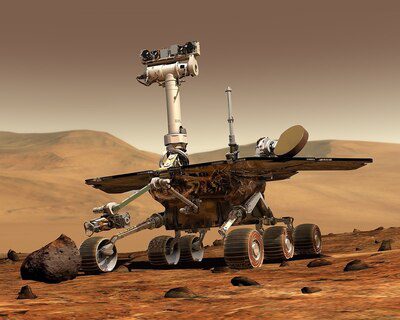