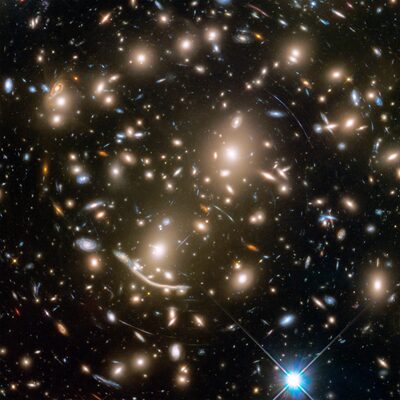 Dark matter, a great part of the matter in the Universe is absolutely invisible and unknown.

Existence of dark matter and its discovery

We currently believe that we know that the billions of galaxies, each containing hundreds and billions of stars, constitute only a tiny part of all the matter in the Universe (a scant 10%) and that all the rest (90%) it is absolutely invisible and unknown.

In tbe cover image you can see billions of galaxies. It shows a Universe full of galaxies.

These are properties inconsistent with the characteristics proposed by physics and do not appear in serious science fiction writing.

Among the achievements  of Vera Rubin is the discovery of what is called “dark matter” and that seems to constitute 90% of the existing matter in the Universe.

Dark matter is invisible, but its gravitational pull is slowing the expansion of the Universe.

Studying the movement and brightness of spiral galaxies, she concluded that there were some that seemed to travel more quickly in one direction.

What is the truth about dark matter?

How do we know it exists if it does not emit or reflect enough electromagnetic radiation detectable by the sophisticated instruments available in the 21st century?

The gravitational effects measured in the matter that we can visualize, lead us to think that there is something “unknown” that we cannot perceive and that it constitutes nothing less than the remaining 95% of the Universe.

There are studies and observations that corroborate the fact that many galaxies are made up mainly of dark matter.

The Milky Way is believed to be 90% dark matter and only 10% ordinary matter.

To detect it with greater certainty, researchers will have to wait for new data to be obtained from the Hubble space telescope, for the results of the James Webb space telescope, launched in 2013 and. above all, to the information provided by the Euclid space probe scheduled for 2020 and in the development of which Spain has a special participation.

Apparently, Edwin Hubble was also a fan of science fiction novels and, although his discovery was something very serious and rigorous, he decided to give it a more striking name than “unknown matter”: he called it “dark matter“.

And with this sinister name this unknown component of the Universe has remained.

At the 1975 American Astronomical Society meeting, Vera Rubin and Kent Ford announced to the entire scientific community that half of the mass contained in spiral galaxies was not visible but was present in the form of “dark matter.”

At first, this result was met with skepticism. However, other corroborating works quickly appeared.

Since 1978, Vera and her team have observed more than 200 galaxies and have been able to calculate that approximately 90% of the matter in the Universe is “dark” matter, not visible, but detectable by the gravitational effect it produces.

Back in 1933, the Swiss scientist Fritz Zwicky (1898–1974), who worked at the California Institute of Technology (Caltech), provided evidence for the possible existence of an unknown matter that made up most of the cosmos.

It is known that Fritz Zwicky was not wrong, since the observation of the rotational speed of galaxies and the orbital speeds of galaxies in clusters, the temperature distribution of hot gas in galaxies and multiple other measurements, confirm that the Universe contains much more matter than interacts with electromagnetic radiation.

In theory, normal matter (or baryonic, because they have detectable interactions with each other) is composed of protons, neutrons, electrons.

The search for dark matter

The other mysterious form of matter would be composed of unknown non-baryonic subatomic particles, massive particles with little interaction.

These hypothetical particles would be very massive and difficult to detect.

Neutralino is one of the candidates to be part of dark matter and is one of the elements that is being detected with the LHC, the hadron accelerator located at CERN in Geneva.

In 2005, astronomers at Cardiff University claimed to have discovered a galaxy made up almost entirely of dark matter, 50 million light-years from the Virgo Cluster.

This deep image of the Virgo Cluster obtained by Chris Mihos and his colleagues using the Burrell Schmidt telescope shows the diffuse light between the galaxies belonging to the cluster.

North is up, east to the left. The dark spots indicate where bright foreground stars were removed from the image. Messier 87 is the largest galaxy in the picture.

It was given the name VirgoHI21 and apparently does not contain any visible stars.

Models of the Big Bang and the large-scale structure of the Universe have suggested that such dark galaxies should be very common in the Universe, but so far none have been detected.

If the existence of a dark galaxy were confirmed, it would be a formidable piece of information that would serve to test the theory of galaxy formation and would raise the need for alternative explanations of what dark matter is made of.

This matter is crucial to the Big Bang model.

Astronomical observations as they suggest that the evolution of the Universe began with small structures that, collapsing together, formed galaxies and later galaxy clusters.

In the early Universe, ordinary matter would have too high a temperature and too much pressure released from the Big Bang to collapse and form small structures, like stars.

The dark matter would act as a compactor of structures. From this it follows that dark matter is crucial to the Big Bang model.

One type of dark matter is known: the neutrino.

Neutrinos have a very small mass, they do not interact through electromagnetic forces or the strong nuclear force and are therefore very difficult to detect.

However, it appears that ordinary neutrinos only make up a small part of dark matter.

NASA officially announced its participation in “ESA’s Euclid mission“, a space telescope to be launched in orbit in 2022 and designed to investigate the mysterious nature of matter and energy dark.

Dark matter is invisible, but its gravitational pull is slowing the expansion of the Universe.

Dark energy, however, seems to be speeding it up.

These two mysterious components are postulated to constitute more than 95% of the mass and total energy of the Universe.

But what they really are remains a mystery.

The origin of the Universe