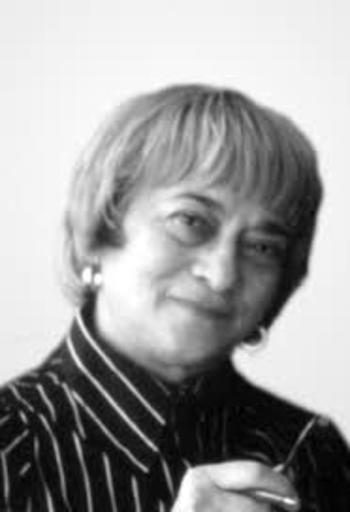 Paris Pishmish Mexican Astronomer, is considered the mother of Mexican astronomy, for her long and generous contribution to the training of young astronomers in Mexico.

Dr. Paris Pishmish was the first astronomer, male or female, with professional training that Mexico had.

It is still curious that the first Mexican astronomer was of Armenian origin and Turkish nationality. Although she never lost contact with her country, Paris Pishmish spent most of her life in Mexico.

She was one of the first women to graduate from Istanbul University.

Her parents were Armenians, from a wealthy family and of ancestry. The surname Pishmish, in Turkish, is a noble title that was granted to her grandfather’s grandfather, when he was Minister of Finance in Turkey.

One great-uncle was patriarch of the Armenian church.

As a child, Paris Pishmish had two great hobbies: music, especially the piano, and painting. Both hobbies were practiced throughout her life.

Paris Pishmish attended an American school, the “American Mission Board“, which was beginning to become known in Turkey.

In addition to Armenian and Turkish in primary school, Paris Pishmish learned English and French in secondary school.

When Paris Pishmish was 18 years old, she found that girls from good family did not go to college, but had to dedicate themselves to finding a husband.

She begged insistently until she convinced her parents that they should allow her to continue studying at a university.

Her parents agreed to enroll her in the “American Academy of Women“, located in Uskudar, in the Asian part of Istanbul.

At the beginning of the course she had difficulty following the classes in English. Her favorite language was German, as she was very fond of Schubert’s music.

Soon, mathematics caught her attention. The fact that in her environment mathematics was considered unsuitable for women, was a determining reason for Paris Pishmish to dedicate maximum effort to her learning.

She commented that if Marie Curie could dedicate herself to science, why couldn’t she?

As soon as she could, she enrolled in the “Istanbul University Faculty of Science”.

Istanbul University was reorganized in 1933, under the vigorous impulse given by President Kemal Ataturk, and was the first modern university in the Republic of Turkey.

In this institution, all the previous teachers were retired and replaced, especially by teachers who came from Germany, escaping from Hitler. The University was filled with foreign professors.

With Finley Freundlich Paris Pishmish learned astrophysics and perfected her German. In exchange, she translated his courses from English into Turkish for Freundlich.

During her stay at Istanbul University, she worked as an assistant at the University Observatory. One of her duties was to act as a translator and interpreter from French, German or English into the Turkish language.

In 1937, she graduated and was the first in her class. She obtained a doctorate degree in Mathematics, with a thesis on the rotation of our galaxy, the Milky Way.

What Paris Pishmish did is interesting and almost spectacular, because much later, in the 1960s, Margaret and Geoffrey Burbidge, together with the astronomer Kevin Prendergast (1929-2004), published the first study on the rotation of a galaxy. Based on these data, they calculated its mass.

Due to the excellent work done by Paris Pishmish as a research assistant, Professor Freundlich recommended her for a scholarship at Harvard University.

In November 1938, Paris Pishmish left her native Istanbul, to travel to the United States.

From the year 1939, before the start of the Second World War, she was able to enjoy a Guggenheim Fellowship at Harvard University.

The most famous astronomers passed through this university, the most prestigious at that time, especially in 1939 on the occasion of what was the first “summer school”, in which Paris Pishmish participated.

Paris Pishmish spent more than three years in the United States, in the Astronomy section of that university, where she worked as an assistant astronomer at the “Harvard College Observatory” (HCO).

At the HCO she found a very stimulating environment as a scientist, led by eminent astronomers such as Harlow Shapley, Cecilia Payne-Gaposchkin, Bart Bok, and the many visitors the Observatory received.

With all of them she always cultivated a lasting friendship. She also met there who would be the great love of her life, and who would lead her to a previously unsuspected country.

In 1940, the young Mexican mathematician Felix Recillas was at Harvard University, studying astronomy.

The presence of Félix Recillas at Harvard was part of the initiatives being carried out by two pioneers of astronomy in Mexico: Joaquin Gallo and Luis Enrique Erro, both engineers by profession and enthusiastic amateur astronomers.

They had already succeeded in getting the Mexican government to begin the construction of an astronomical observatory in tune with the most advanced in the world, in the town of Tonantzintla, near Puebla.

Félix Recillas’ interest in learning to speak German led him to meet Paris Pishmish, who offered to help him. After a few classes they found that they were made for each other. A year later, in 1942, they were married.

Félix Recillas was later a prestigious doctor in Mathematics.

Mexican astronomy was booming with the construction of the “National Astrophysical Observatory” in Tonantzintla.

The inauguration of the Observatory took place on February 17, 1942. In addition to the formal ceremony, an International Astronomy Congress was organized. The congress represented the first contact of Paris Pismish with the Mexican country.

As of that date, Mexico could have a new observatory, but it lacked professional astronomers. Even the director of the Tonantzintla observatory, Luis Enrique Erro, was a diplomat by profession and an astronomer by hobby.

In 1943, Paris Pishmish left for Mexico to work at the Tonantzintla Astrophysics Observatory in Puebla.

She stayed there until 1946 and in those four years she learned Spanish, her sixth language. In addition, during her stay in Tonantzintla, Paris Pishmish brought her two children Elsa and Sevin, today excellent Mexican scientists, to the world. Elsa Recillas Pishmish is an astrophysicist.

A grandson of Paris Pishmish accompanied her on her travels in recent years.

From 1946 to 1948, Paris Pishmish made several temporary stays at Princeton University and the Yerkes Observatory in the United States.

From 1948, Paris Pishmish settled in Mexico

In 1948, she moved to Mexico City to work as an astronomy professor at the old Tacubaya observatory, attached to the “National Autonomous University of Mexico” (UNAM).

Starting in 1955, Paris began to teach the first regulated astronomy courses in Mexico, becoming a teacher and source of inspiration for the first professional Mexican astronomers.

She worked as a teacher for more than half a century, until her death in 1999. It is not an exaggeration to say that Paris Pishmish was the teacher of the vast majority of professional astronomers that Mexico has had.

With a Mexican passport, Paris Pishmish continued to travel to Turkey once a year. Despite the exhausting transatlantic voyages, she visited Smyrna, where the Astronomy group that she helped to create was located.

One of the characteristics of Paris Pishmish was her constant interest in proposing new challenges and pioneering technical developments at the University.

As an exceptionally good astronomy teacher, she had a very positive influence on young Mexican students. As a result, today, 25% of astronomers who work in universities are women.

The UNAM recognized her work by granting her an Honoris Causa doctorate.

For her contribution as a teacher for young astronomers, she was awarded the UNAM Science Teaching Prize.

She contributed, with her studies of stellar populations, to explain the origin of the spiral structure of galaxies by means of density waves.

Her most relevant contributions include the discovery of three globular clusters and twenty open clusters. Several of these clusters bear her name.

She proposed an explanation for the structure of spiral galaxies and spent a good part of her years studying the motion of stars within clusters and galaxies.

She also studied the effect of interstellar absorption of stellar associations on the large-scale distribution of stars in the galaxy.

In 1972, Pishmish introduced Fabry-Perot interferometric methods in Mexico to be able to carry out studies of velocity fields of galactic nebulae.

Dr. Paris Pishmish published more than 120 articles on different topics in astrophysics, although her main field of interest was galactic structure.

In addition, she always promoted the publication of Mexican astronomy magazines.

Her memoirs were published in 1998 under the title “Reminiscences in the Life of Paris Pishmish: a Woman Astronomer“. It is her autobiography, written in English, in collaboration with her grandson Gabriel Cruz González.

Paris Pishmish Paris always had an overwhelming enthusiasm for astronomy, not just as a teacher, researcher and editor.

She was also very active in various professional organizations such as

This wonderful woman passed away on August 1, 1999, in Mexico City. She was 88 years old, more than 50 of them dedicated to training astronomers, especially in Mexico, her adopted country.