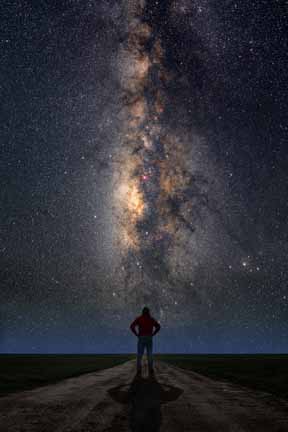 The human is aware that he is physically stardust. The human have brain and is aware of himself. And he has been interested in deciphering and understanding the composition and origin of this Universe.

On the cover image you can see the marveling at the beauty of the Milky Way. Credit: web “observatorio.info”

In some corner of all this are small beings that materially are little more than nothing: the mankind.

Scientific advances in the 19th century led some philosophers to think that man had unraveled the mysteries of the Universe.

Among them was a conceited Nietzsche, who if he were reborn, would die again, of shame for what he said, if he found out what we think we know today.

In this image obtained with the Hubble Space Telescope, and published by NASA, you can see a part of the immense universe full of galaxies. Each of those galaxies have million of stars. One of these star is our Sun.

Currently, new discoveries in the knowledge of the world and of matter, make enlightened thinkers, such as Hubert Reeves, consider the situation from a more modest perspective and frequently use phrases such as: “we have reasons to think …”, “we believe know that …. “,” it seems that … “.

When the exact composition of matter was believed to have been discovered, it turned out that new unknowns were found each time.

It seems that the discovery of elementary particles is a never ending story. The microscopic world is complicated by delusional theories, which the more crazy they seem, the more they respond to the reality that is discovered.

The epic of the discovery of the Universe has only just begun.

In the last 400 years, observation instruments have evolved a lot.

Since Galileo began using telescopes to observe the sky (1609), almost 200 years have passed until the great telescope that Herschel built and that was bought by Carlos III’s Spain for his National Astronomical Observatory.

The great technological advance has come in the last 100 years, with giant telescopes scattered throughout all regions of the planet and even soaring through the skies.

Until less than 100 years ago, researchers practically worked alone, isolated from each other and with artisanal means.

It is enough to remember how Copernicus, Galileo, Kepler, Herschel, Newton and so many others worked.

Currently the working groups are made up of thousands of scientists and researchers from various specialized branches; They have sophisticated observation and calculation equipment.

Recent research has concluded that 96% – no less than ninety-six percent – of matter is invisible to our instruments.

Astronomers and physicists know it exists by observing the gravitational effects of this unseen matter. It is the mystery of dark matter.

Fortunately, since the second half of the 20th century, the unjust and irrational discrimination against women in scientific activities has been eliminated.

Since they have been counted on, their contributions have been remarkably enriching.

The slow and sporadic communications of the past could take months to reach their recipients; now reports and releases are frequent and numerous.

The entire scientific world can know practically instantly what is being done in any part of the world.

The image of the artisanal methods used by the privileged brain of Isaac Newton (1643-1727) to open one of the main loopholes that have allowed us to begin to know the properties of matter.

On the photographic composition of the linear hadron accelerator (LHC) in Geneva, which has cost billions of euros, but can provide valuable information about what matter is and especially how this Universe in which we are began .