The ISS is a large international space research platform that orbit the Earth every 90 minutes at a  height of between 335 and 460 kilometers.

In the cover image you can see the International Space Station orbits 248 miles  above Earth. Credit: NASA, web “space.com/34650-track-astronauts-space-new-interactive-map.html”

If one day we are lucky enough to see the ISS pass over our street, we will be looking at the most modern laboratories in the world, closely cared for by 7 astronauts, but used by thousands of scientists and technicians from Earth.

Characteristics of the ISS

The International Space Station (ISS) measures 108 meters in length and 74 meters in width.

ISS navigates at a height of between 335 and 460 kilometers above our heads, moves at more than 26,000 kilometers per hour and takes 90 minutes in each turn around the earth.

Feats accomplished by the ISS

The most significant achievement of the International Space Station (ISS) has been to bring together, for the sake of science and progress, the work of countries in North America, South America, Europe and Asia.

As of December 2009, 16 countries are working in the ISS project: USA, Canada, Russia, Japan, Brazil and 11 Europeans, including Spain.

On November 20, 1998, a Russian rocket launched the first module of the future ISS into orbit: a Russian module designed to provide the ISS with its initial power and propulsion.

When the ISS was fully built, according to the initial project, about 45 trips and 91 spacewalks were made for the shipment and assembly of all the parts.

The Mexican-born astronaut Ellen Ochoa was one of the most active builders on the Station. ISS is currently inhabited by 7 astronauts.

Currently the ISS is a large international space platform where fundamental research is carried out for scientific and technological studies: space manufacturing products, astronomy, remote terrestrial detection, mechanics of materials and fluids, development of plants and animals, biotechnology, etc.

Most of these experiments use the microgravity conditions existing on the ISS.

The microgravity of space has become an important tool for scientists to develop highly sophisticated materials of enormous value for later use on Earth, in fields such as medicine, biology or chemistry.

During the STS-129 space mission carried out on November 21, 2009, astronauts Mike Foreman and Randy Bresnik made a special trip to install an antenna for radio amateurs on the ISS.

This was one of the tasks they performed during the six hours and eight minutes that they were in outer space.

The food of the astronauts

Feeding the astronauts of the Space Station requires having freeze-dried (cold dehydrated) food that maintains all its nutrients and does not grow microbes.

In the space menu there are up to twenty possibilities: chicken, corn pancakes, prawn cocktail with hot sauce, energy drinks and instant coffee.

To cook this pantry, the International Space Station has a device that allows freeze-dried food to be rehydrated and a kind of oven to heat it.

Among the women astronauts who worked and lived there are: Ellen Ochoa and Peggy Whitson.

There are currently six crew members aboard the ISS: mostly Russians and  Americans.

Launching satellites from the ISS

On October 18, 2012, for the first time the International Space Station, becomes a platform to launch small satellites.

The crew of the Space Station launched four small satellites.

These four devices, called CubeSats, are a few inches wide each.

Supply for the International Space Station

An automated transfer vehicle, take off every so often to the international space station (ISS) to which it take, in addition to fuel, food and water for the astronauts.

On March 1, 2013 it was sent a second mission of a capsule of the private company Space X to bring food and supplies to the Space Station.

The unmanned Dragon capsule, carried by the Falcon 9 rocket, was in charge of bringing 575 kilos of supplies, food and scientific material back to the space station.

The ISS crew commander on duty, Kevin Ford, and flight engineer Tom Marshburn are scheduled to use the station’s robotic arm to capture the Dragon as it approaches the orbital complex.

They will then dock the Dragon in the Harmony portion of the module for several weeks, while the astronauts rake the cargo.

Sending robots to the ISS

In June 2018, on expedition 56 to the International Space Station, the USA sent three astronauts and CIMON, a robot with artificial intelligence.

In the brain of CIMON, with a vocabulary of more than 1,000 words, the plans and procedures of the scientific laboratory that the European Space Agency has on the space station have been loaded.

In August 2019, Russia sent Fedor, its first humanoid robot, to the International Space Station. Fedor stayed there for 10 days..

The Fedor robot has a silver anthropomorphic body, measures 1.80 meters and weighs 160 kilos.

How and when the ISS can be spotted

In December 2009, after the deployment of four new sets of solar panels, the ISS has become the second brightest object at night, after the Moon.

Even during the day it is possible to see it soar through the sky.

The Space Station is the third brightest object in the sky, after the Sun and the Moon.

It’s easy to see when you know exactly where and when to look in the sky.

There is a NASA service that sends an email to your mailbox, a few hours before the Space Station passes over your house.

The Space Station looks like an airplane moving in the sky on a clear night, moving about 300 km from the ground.

The space station is visible because it has a surface that reflects the light of the Sun.

However, the space station isn’t bright enough to see during the day. It can only be seen when it is dawn or dusk at your location.

Additionally, the ISS cannot be seen when it is flying through Earth’s shadow since there is no sunlight for it to reflect back down to Earth.

There are many websites and cell phone apps that can be used to notify onlookers when the ISS will be visible.

This includes NASA’s Spot The Station website which lists every time the ISS will be visible for a given location over the next two weeks. 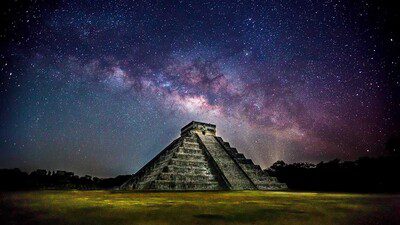 Astronomy of the Maya

The Greeks were great astronomers in ancient times