The Earth is said to have formed about 4.5 billion years ago.  The Earth wanders through space, following the Sun and spinning in one of the arms of the galaxy.

In the cover image you can see the first photograph taken by humans of the entire Earth. It was photographed by the Apollo 8 crew, from a distance of about 30,000 kilometers.  Credit: NASA

The human beings live on a beautiful, but delicate and thin envelope of the planet Earth.

The earth’s crust in the oceans measures 12 km on average; and on the continents, it reaches 80 km.

The atmosphere is a delicate resource that encapsulates the Earth, that protects it from the terrible solar radiation and that forms a true chemical and electromagnetic laboratory that maintains life in it.

Antiquity of the Earth. Since when did the Earth exist?

In all textbooks, the Earth is said to have formed about 4.5 billion years ago. This data is not obvious and it took a lot to find out.

In the 4th century BC. the Greek sages, especially Aristotle, Eratosthenes and Aristarchus of Samos had deduced that the Earth, the Moon and the Sun were spherical in shape.

2,000 years passed until, in the 16th century AD, Tycho Brahe and Johannes Kepler discovered that the orbit that the Earth described around the Sun was in the form of an eclipse.

In those years, no one even thought about where to start to find out how long the Earth has existed.

It took the late nineteenth century for the famous and respected British physicist William Thomson (1824 – 1907), better known as Lord Kelvin, to affirm in 1892 that the Earth was more than 30 million years old that was calculated at that time.

His estimate was that the Earth, even older, was no more than 100 million years old.

This deduction by Lord Kelvin was in conflict with the discoveries of Charles Darwin, since so few years did not allow time to fit the evolution of the species.

One of the data that Lord Kelvin did not know was the existence of radioactivity.

But, more important than this, their calculations were wrong because they did not take into account that the internal heat of the Earth is transmitted not only by conduction, but also by convection.

Is there fire inside the Earth?

What is true is that the center of the Earth is extremely hot.

A simple way to explain what the Earth is like, that is, it is made up of:

Earth has an equatorial radius of 6,378 km. The pressure that this immense mass exerts inside it, due to gravity, is millions of times the pressure on the surface.

These high pressures increase the temperature at the center of the Earth and trigger nuclear meltdowns, as a result of which heavy metals are generated and a lot of heat is produced.

Knowledge of the interior of the Earth is based on the study of seismic measurements.

The core of the Earth is a central sphere made up mainly of iron (80%), nickel, lead, uranium, gold, mercury, and some other lighter elements. The temperature of this core is above 6,700ºC.

It can be said that the core has a solid inner part surrounded by a less solid part.

In 1936, Professor Inge Lehmann discovered that the inner area of ​​the nucleus is a solid sphere of about 1,200 km in radius.

This inner core is surrounded by a semi-solid layer called the outer core.

Because all this central material of the Earth is rotating, the friction between heavy metals generates a lot of heat and, in addition, produces various physical phenomena that result in an electromagnetic field that surrounds the entire Earth.

The central axis of the Earth’s magnetic field is inclined at an angle of 11º with respect to the Earth’s axis of rotation.

It is as if there is an immense magnet that crosses the entire Earth passing through its center, but inclined by 11 degrees.

This gigantic natural electromagnet, called the magnetosphere, affects the entire region above the ionosphere, tens of thousands of kilometers in space, protecting Earth from ultraviolet radiation and cosmic rays.

Without this magnetic shield, there would be no human life on Earth.

The Earth’s mantle is a 2,890 km thick layer that surrounds the outer core.

It is composed of siliceous rocks, rich in iron and magnesium that, due to the high temperatures, are viscous and fluid enough to generate streams of materials that rise to the surface and that when cooled move downwards.

Since the melting point and viscosity of a substance depend on the pressure to which it is subjected, the lower part of the mantle moves with greater difficulty than the upper mantle.

At the same time, the cooler parts of the Earth’s mantle are seeping into the Earth’s interior.

In the upper mantle, the silicates are normally solid and the rocks have a relatively low viscosity.

In contrast, the lower mantle is subjected to a much higher pressure, which makes it have a higher viscosity compared to the upper mantle.

The Earth’s crust covers the entire surface of the Earth, surrounding the Earth’s mantle.

The thickness of the crust does not exceed 60 km, it is about one hundredth of the radius of the Earth, 6,378 km.

In mountain range areas, the earth’s crust is up to 70 km thick. On the other hand, in the bottoms of the great ocean basins the average thickness is 7 km.

In this thin layer are the oceans and mountain ranges. Thanks to the fact that throughout the 4.5 billion years that the Earth has, the whole set has been surrounded by the atmosphere, life has developed here.

The Earth is a small particle in the Universe.

The following photograph was taken from the Voyager 2 spacecraft, which was investigating the rings of Saturn.

The small luminous point, in the upper half of the image, is the Earth, our abode, our spaceship, our Earth. 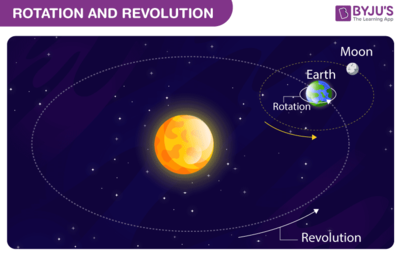 The earth year and the calendar