On these nights, the observation of the Moon is a temptation that cannot be resisted.

A few simple binoculars firmly attached to a tripod are enough to contemplate in all their beauty and quite clearly the mountains, craters and “seas” that cover the surface of our beautiful natural satellite.

Moon in waxing or decreasing quarter

The best time to observe the Moon is in the waxing and waning quarters.

In these phases is when the play of light and shadow becomes evident, the height of the mountains and the depth of the craters, the area where light and darkness meet, the area that separates the lunar day and night.

Many craters are seen on the Moon

All of these craters are by the impacts of asteroids and meteorites.

The craters were not originated in volcanoes, but were produced by asteroid impacts.

A interesting chart of Peter Frieman shows the largest craters and lava basins visible on the near side of the Moon.

The most interesting that we can see from Earth are:

On the far side, the Apollo crater stands out, with 520 km in diameter.

In the south of the lunar surface is the Tycho crater (60), the most striking in the southern area and radiating in all directions.

Just on the opposite side, very close to the northern rim, Plato crater (80) is striking, perfectly circular with a very dark interior.

The seas of the Moon

The seas are not made of water. The parts of the lunar surface that we see darker, called seas, are large flat areas that occupy about a third of the visible face of the Moon.

They were called that because in ancient times the observers knew the surface of the Moon well and it was believed that those dark areas were oceans similar to the seas on Earth.

This Earth-based view of the full Moon enhances the contrast between the dark maria and the bright-rayed craters, such as Tycho (near bottom center), named after Tycho Brahe.

The dark circular Mare Imbrium (Sea of Rains) is prominent in the northwest (upper left).

Immediately above the bright rays of craters Copernicus and Kepler (middle left).

The dark circular Mare Serenitatis (Sea of Serenity) lies to the east (right) of Imbrium.

The automatic lunar probes Luna 9, Luna 13, Surveyor 1 and Surveyor 3 landed in the Ocean of Storms.

The Apollo 12 mission, in which astronauts Pete Conrad and Alan Bean traveled, also landed in this Sea, which has a surface almost triple that of Spain.

The mountains of the Moon.

Most of the lunar mountains receive the same names as those of some terrestrial mountain ranges: Alps, Apennines, Pyrenees.

In the Apennine range you can see Mount Hadley (4,800 m), Eratosthenes Crater and Mount Archimedes.

Eclipses of the Moon 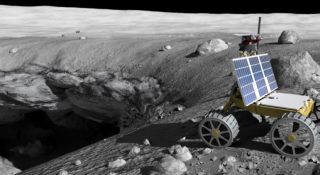 The Moon is a satellite of the Earth