Translation of the Earth is due to the force of gravity

In the cover, you can see an image of Earth revolution  Credit: web “exampariksha.com”

In one day, all the inhabitants of the Earth have traveled 2,544,000 km in orbit around the Sun.

It is the same as saying that, after 24 hours, we are more than 2 million kilometers from where we were previously! !

At the equinoxes, the Earth’s axis of rotation is perpendicular to the Sun’s rays, which fall vertically on the equator.

The Sun occupies one of the foci of the ellipse.

Due to the eccentricity of the Earth’s orbit, the distance between the Sun and the Earth varies throughout the year and the Earth travels its path with variable speed.

The Earth in its trip around the Sun takes a complete revolution 365 days and 6 hours, approximately.

More exactly, 365 days, 5 hours and 57 minutes 365.2422 days This is the so-called translational movement, which corresponds to the solar year.

The four seasons of the year

The four seasons of the year are determined by the inclination of the earth’s axis with respect to the elliptical.

Depending on the position of the earth relative to the Sun, some land areas receive more solar radiation than others. 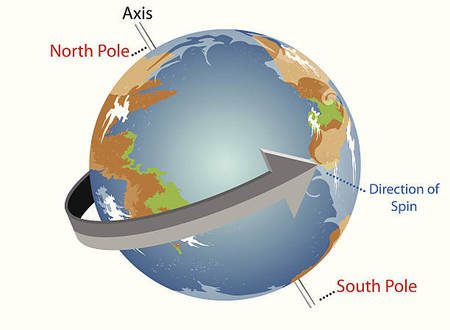 Rotation of the earth